GPU-Accelerated Computing
Using a GPU with a CPU to speed up computing is called GPU-accelerated computing. In this relationship, the GPU does the compute-heavy portions of code. The GPU's architecture of thousands of smaller, more efficient cores lend itself to GPUs being able to do many computations quicker than a CPU can. GPU-accelerated computing includes: deep learning, analytics, and engineering applications
Deep Learning
Deep learning is a section of AI where the computer teaches itself to do things by looking at lots of data. GPU's parallel architecture that contains many cores lends itself to being able to do multiple calculations simultaneously. Computers use neural networks to see, learn, and react to complex situations like humans, or possibly even better. Most computers for deep learning use NVIDIA's GPUs. GPUs can speed up challenging things such as recognizing handwriting and voice identification. The use of GPUs can speed up networks by 10-75x that of CPUs because of parallel workloads. 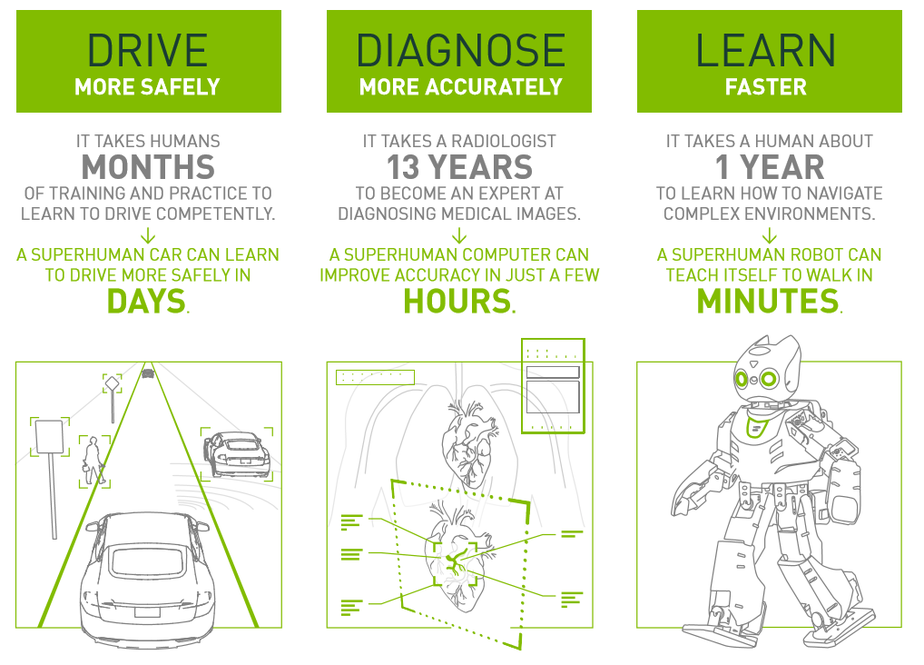 Deep learning can be used for a wide variety of problems. It was used to give an estimate of the number of Grevy's zebras left. Volunteers went out and gathered about 40,000 pictures of them. A computer was able to give an estimate of about 2000 unique zebras. It was basically able to compare zebras stripe patterns against the pattern of other zebras, similar to barcodes.
Using GPU-accelerated computing, Microsoft got a world record for speech recognition. It hit an error rate of 5.9%, which is basically that of a normal human. Convolutional and and recurrent neural networks helped them achieve this error rate. GPUs drastically reduce the training time of language models, which allows them to make more experiments. That, of course, is a very good thing!
There is also a new device, called Horus, that uses deep learning and computer vision to allow a blind person to "see" things around them.